The Tarot of the Financial Crisis
– begun in the USA and Tsunamied worldwide
The Fall, 2008 – and a few years later the people got wise and started to discuss the 1% problem.

The Tarot Cards reflect the divination of synchronicity. Timing is of the Essence. Symbols and Signs are full of meaning.

The Cards are amazing in their uncanny accuracy. In the case of this particular question, I was personally impressed with the inspired images and implications. They reinforced my intuitive sense that what we were being told was not the whole truth. The similarity of this “crisis” with the previous one in the 1980s – under papa George Bush – the Savings & Loan scandal, was too suspicious. The same people are behind the present occupier of the White House, George Bush the junior. I read recently that this financial bailout could be called Bush’s Last Heist. With the money gone, there would be nothing to fund the liberal Democratic social programs, and many of Obama’s promises would be redirected to the poor fellows on Wall Street.
Obviously, I have a bias and a wary suspiciousness of the Bush-Cheney/military-industrial/corporate raiders cabal. One thing about the Tarot Cards is that an individual’s prejudice may not necessarily be displayed in the symbols. There have been several times that my basic idea about a situation was not indicated by the Cards, and I had to change my position. Another great thing about the Tarot Cards is that anyone can look at the symbols, the pictures, and read some meanings.

As everyone knows, the financial crisis and the subsequent bailout by taxpayers (and the taxpayers of the next decade) of financial systems, investment firms, banks, mortgage institutions, et al., began to snowball in September 2008. It quickly became the main issue in the November USA election. In a few years it was the outrage which evolved into the Occupy Wall Street movement.
Early reports pointed towards $800 billion to $3 trillion in corporate handouts. The Auto makers jumped on that gravy train.  The UK and Germany were soon doing their own bailout schemes in their countries. It has touched most of the globe by the time of this first writing, approaching the Solstice, 2008.
Update: banker bonuses, insider deals, backroom lobbying … it all continued until a sizable populace had had enough. Astrologically the extremely interesting Neptune Return (to the position it was found at in Aquarius from its discovery in 1846 – please note similar social upheavals from that time!) in 2009 adds a whole new element to the zeitgeist.
But back to the original Tarot reading. My basic question was this: What is this financial crisis about, really?

The Layout of a direct question like this could take many forms. I chose a simple layout: 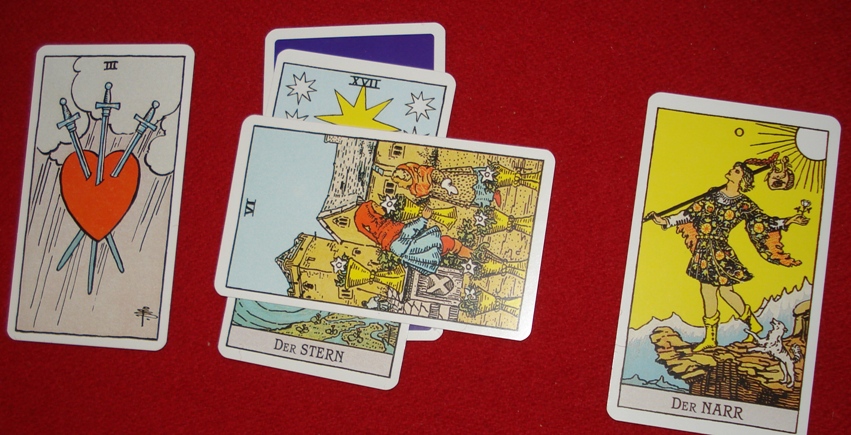 The recent past points to the many people who lost their jobs, homes and savings. Stress, heart-ache and cloudy skies of worry. The tears of the past make people stop and slow down; it may drain them too. When one is hurt, one treads more slowly and warily into the future (look at our grand parents and parents who lived through the Depression and the World Wars). Hurts like this can create a docile or anxious populace, ready to compromise to have some peace.

The dynamic tension in the middle is found by the Star (Stern in German), indicating a distant sun (not our own). More on this below. The cross Card is the 6 of Cups, showing two peasant children tending their garden. Their homes are in need of repair. They are relatively innocent and unaware. Good people in the middle, opposed by a star that is otherworldly and foreign.
What is next? Where is this leading to? The Fool (Narr in German) is also unaware, foolish and optimistically marching close to a precipice. One meaning of precipice is: The brink of a dangerous or disastrous situation. The faithful white dog, representing instincts, is barking, trying to get the fool’s attention. And so … all goes naively forward, or backwards, in an old story.

The Two middle Cards deserve a little more attention, for they describe the present crisis:

The Star shows life on an ideal (other planet). This is other-worldly and often not relevant to life in the third dimension. This is nice sounding theory. This is reminiscent of neo-classical economic theory, in which the consumer is rational and capable of informed choices in the market place. Although this theory does not hold true at all, it is still part of many economic perspectives today.  One could also look at the bewildering array of financial packages, short term schemes, speculation bubbles, futures trading, pork bellies, sub-prime calls, and the fickle market and make the conclusion that This Is All Made Up.
We are being told to believe something that is not true. If we were to read a tale from Narnia, or Middle Earth, or Hogwarts, at least we know this is someplace other than here and now (the Star). Make believe. This is fiction. This is the Card representing the financial crisis!
Ah, but people are suffering; therefore, it is real. Yes, the Card of the recent past tells us that real suffering is coming from this, but we can also look back in history and see that much suffering came from slavery, another made up system of economic trade and production. It too was a false idea. It was backed up by markets, fairs, businesses, transport shipping of goods, etc.
The present system is full of holes. For instance, Aristotle bemoaned the unfair idea of interest 2,500 years ago. He argued that money creating money is absurd. Nothing is produced or created. Usuary was considered a common and vulgar practice for a thousand years. Modern “pragmatists” today wink at Aristotle’s naïveté. These same clever investors tried to make some profit from basic foodstuffs earlier in 2008, more than doubling the price of grain and other survival foods, creating more poverty and suffering. Riots were the result. They’ve been behind the rising bubble of the housing market every since they got stung in the internet, dot com speculation bubble in the late 1990s. Where’s the money? Where’s the money?
The Star also presents to us the cookie-cutter make believe ideals of a perfect family, an 8 to 5 job, 2.4 children, vacations to Disneyland, two cars in every garage, unlimited economic growth, the American dream, etc.
The two children contrasting the Star are trying to deal with the everyday world, but they are not keeping up with the fictional Joneses. Why? they are up against the confusing priorities of the economic star. Although they should be repairing their houses or growing vegetables, they are focusing on flowers. Perhaps they want to get in on the promising market riches by specializing in boutique flower shops. When craziness reigns, the innocent get caught up in the paradigm.
We are heading to more foolishness.

What is hidden?
Which Card is facing away, behind the scenes, behind the present crisis and not in the open? 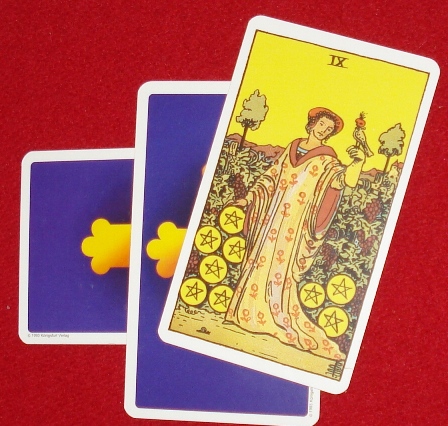 The Super Rich.
This Card displays the luxurious lifestyle of the wealthy.
The rich get richer, and the poor get poorer. The old story of avarice, greed and self centered perspective, hiding behind the confusion and misery. An old story.
Socrates warned that any society with extremes of wealth – the very rich and very poor – will suffer injustice and crime.
Is this a conspiracy, or merely a system that works for a minority?
Meanwhile, the “front” (card) for this class is the Star, with the fable told that “this wealth is for everyone! You too can join the wealthy.” (So don’t question their right to enjoy their good life. The marketplace can give you the same thing.) Play the Lotto! Invest in the Stock Market! Invest in America!

Ah, says I, but is there any way out of this miserable (for most) cycle of irrationality, suffering and lop-sided selfishness? So I put another Card to the right of the Fool. Can this be the remedy? The way out?

The Magician (Magier) comes to the rescue!
We must awaken to the truth, be our own magicians, do our own magic and take charge of our destinies.
The symbols of the 4 suites are there for us to use – we have all of the wisdom, the technology, the collective skills and the creativity to get ourselves out of this hypnotic trance.
One hand points to heaven, representing the inspired high road, the Oneness of our divinity. The other hand points to the Earth – live here, on this beautiful planet, not on a Star. Know how life works here. Plant the seed in good soil, pour the good water on the plants and set them in the sun: Voila!  flowers and vegetables and plenty! Live in balance and harmony. This is a finite planet and should have a finite population (An unstoppable population is more Star stuff, living without bodies, etc.). Live in harmony with all life forms; think and act ecologically and environmentally.

At the bottom of the deck that I have been using is a Card that represents the Stream of Life that brought us here; the Bigger Picture or the ultimate Lesson in all of this. What are we (collectively) supposed to be learning here?

As in divine Justice. Fairness, equality and balance. Do unto others that which you would have done to you.
Follow the Golden Rule, the Doctrine of the Mean/Middle Way.
This is a Major Arcana or Spirit Card, like the Magician, and points the way to the larger lesson here. We Are our brother’s and sister’s keeper. We do right and right is done.
And so it is!

Feel free to pass this reading on.
Oh, and perhaps this:  Smoke & Mirrors

Who knows, maybe Obama and other politicans and leaders will get inspired. Or even wake up!
We need help, and the usual ways have only been bringing the usual results … misery, poverty and suffering.
Let’s get off the Wheel.

You are the Magician.

Have you seen my Oracle?
www.transpersonal.us